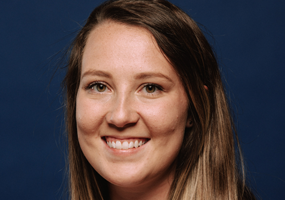 Sydney O’Connor is a 5th year Computer Engineering major, Accelerated Engineering Degree participant, and winner of the 2021 Herman Schneider Award, which is awarded to a senior who distinguishes herself as an exemplary co-op student. She will graduate this spring with both a bachelor’s and master’s degree, and she will leave having established herself as an exceptional engineer, professional, scholar, and leader.

As a Project Engineer co-op at L3Harris Technologies, Sydney built a strong technical foundation for her career. She also developed her leadership skills by forming a collaboration between L3Harris and the UC chapter of Association of Computing Machinery-Women (ACM-W). For two semesters, Sydney organized bi-weekly workshops with female engineers at L3 who taught Python, Raspberry Pi, and professional development skills to undergraduate women in the Department of Electrical Engineering and Computer Science at UC’s College of Engineering and Applied Science.

ACM-W later sponsored Sydney’s attendance at the Grace Hooper Conference, a national conference and career fair for women in computing. There she met with representatives from some of the world’s leading tech companies, including Tesla and Apple; eventually landing co-op rotations at both. Sydney worked remotely for Apple this past year due to the pandemic and was recently offered a full-time position at Apple after graduation.